The store will not work correctly in the case when cookies are disabled.

SHIPPING TO A DIFFERENT LOCATION?

Be advised that all items from your shopping bag will be removed on changing the location. Items Currency, Price, Availability, Delivery timelines & Shopping policies changes in line with your new shipping destination. 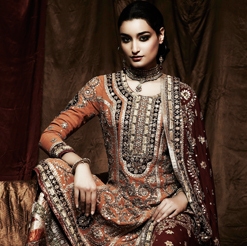 Ritu Kumar is the largest & most respected designer-wear brand in India today. Since 1969, it has developed a unique style of its own, reflecting the ancient traditions of Indian craftsmanship in a contemporary vocabulary. Mrs. Kumar's understanding of ancient designs and the innovative use of traditional crafts has created a new classicism. Today the company is renowned for its distinctive use of colors, quality of fabrics, intricate embroideries and a gloriously rich Indian aesthetic. Since the company was built on patronage of craftspeople, it has made a significant impact in creating employment in underdeveloped areas. Over the years it has patronized several organizations working in these areas and helped in developing skills and taking them to the market.

Ritu who began her career in 1969, started with just four hand block printers and two tables in a small village near Calcutta. Today her brand has grown to retail through ninety three stores across the country. She has pioneered the term ‘fashion' in the Indian context and more importantly has demonstrated that hand-made products can be as profitable and even more glamorous than those made by machine. The company sources the finest fabrics and craftsmanship from across the country thereby reviving great textile skills and providing employment to hundreds of artisans.

In 2002, the company launched a sub-brand LABEL – Ritu Kumar. LABEL uses the established forte of traditional Indian aesthetic to create fashion oriented international products. The brand's charter involves pushing boundaries and forging alliances with design talent across the world to create a unique, sophisticated product. This is aimed at the young, global Indian woman with a contemporary lifestyle. LABEL retails from most Ritu Kumar stores as well as some standalone stores. 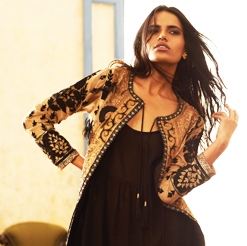 Ritu Kumar as a brand has been admired and worn all over the world. Its patrons include Indian stars such as Aishwarya Rai, Priyanka Chopra, Lara Dutta, Dia Mirza to name a few and international celebrities such as the late Princess Diana, Mischa Barton, Anoushka Shankar. Since 1994, Ritu Kumar has also designed the wardrobes for the Miss India contestants for their participation in international beauty pageants such as Miss Universe, Miss World and Miss Asia Pacific. An impressive number of winners have emerged from amongst these contestants putting India on the beauty map.

Ritu in 1999 published a book "Costumes and Textiles of Royal India" which chronicles the history of textiles and art design in India. Ritu has also been the recipient of numerous awards such as the 'Indira Gandhi Priyadarshini Award' for her contribution in the field of fashion. She has also been bestowed with the prestigious award of "Chevalier des arts et des lettres" by the French government. Most recently, she was awarded the Achievement Award at the Loreal Paris Femina Women's Awards.

Ritu Kumar, has also been awarded the Padma Shri Award 2013, the country's fourth highest civilian award for her exceptional and distinguished service in the field of fashion, textile and craftsmanship.